Detractors of Henry Thoreau sometimes like to point out that for all the rusticity of Walden, Thoreau’s cabin was only a short walk from Concord, and he saw his mother regularly for home-cooked meals and laundry. Perhaps this is, in the end, to his credit. For Thoreau does not pretend to be a thousand miles from civilization; he writes at length about visitors he receives and townsfolk with whom he speaks. “I had three chairs in my house,” he writes, “one for solitude two for friendship, three for society.” Yet when reading Walden, we still imagine Thoreau as “out there” in the woods, and that is for the simple reason that he was. Perhaps you may consider it not much more than backyard camping, but it was sufficient for him to observe intently all the variety and rhythm of woodland life that went on around him. One thing Walden demonstrates, that is especially significant to those of us in the twenty-first century, is that a measure of solitude and discourse with nature can be had closer to civilization than we would otherwise think.

It has been two and a half years since my partner and I moved into our home on a tenth-acre city lot. Though the house was built during World War II, the only thing in the yard that suggested the age of the lot was an old overgrown apple tree, shaggy with moss. There were a few established foundation shrubs, much overgrown; there was a stand of black bamboo growing at the back of the lot, given to the prior residents by the neighbor next door, whose pot it had overgrown; there was a Young’s weeping birch planted jarringly against the house and backdoor, making passage difficult while also fighting against a forsythia squeezed against the foundation. There was also a neglected rose vine tucked away in a corner, nearly out of sight, overtaken by its Dr. Huey rootstock; and there were two arctic willows grafted onto overly vigorous rootstocks which were planted like two shaggy lollipops pinning down the corners of the front lawn. The backyard was especially barren—a huge swathe of grass which turned yellow in the summer and baked dry and hard in the sun.

I grew up in a home surrounded by a sheltering garden. It was on a smallish suburban lot—a bit bigger than mine today—but it had a comforting privacy provided by established trees and shrubs. Thus much of the house looked out into yet another private space, home to various birds and frogs. I’ve never understood a home surrounded by large and open expanses of lawn, especially in a close neighborhood, where privacy is at a premium. And after all the years of my young adulthood spent living in apartments and a duplex, always seeing neighbors pass directly outside my windows, or looking out onto a parking lot, it was a priority to me to have the sheltering kind of garden that I knew growing up.

That meant getting some trees into the ground, and right away, so that they could get established and growing. (My trees necessarily have had to begin quite small—only what could fit into my small hatchback.) The first fall, a couple months after moving in, I planted five: a Parrotia persica, a katsura (Cercidiphyllum japonicum), a Desert King fig, an eastern redbud (Cercis canadensis ‘Forest Pansy’), and a native vine maple (Acer circinatum). Since then, I’ve planted nearly a dozen more—many of them vine maples, my favorite native small tree—as well as several shrubs that will be trained as small trees, such as our native red elderberry, Sambucus racemosa, our native serviceberry, Amelanchier alnifolia, and a Pacific wax myrtle, Morella californica. Those familiar with the foregoing plants will see that I have selected smaller-sized trees to fit the size of my lot, and have planted some of them closely enough that their canopies will knit together. But part of the beauty of this sort of work is that in the urban forest, the canopy need not be too much higher than your head. What is important is to have leaves above you, leaves around you, and shade on the ground.

Thus the main focus in these early years of my garden has been architectural, and it will be another year or two yet before many parts of its structure mature enough for the overall plan to become clear to anyone beside myself. There is certainly no shortage of garden books to guide or provide inspiration to someone creating a small garden from scratch. Yet my first inspiration has been nature as I’ve found it in myriad places: beneath overhanging boughs of Ceanothus in the canyons of northern California and along the redwood coast; on trails along the sand bluffs of the Salish Sea, sheltered by tall arching oceanspray (Holodiscus  discolor); among seaside hedgerows both in my Washington hometown and on the coast of Connecticut; in short, scrubby woodlands in England’s West Country.

I’ve also tried to use many natives, if not strictly to our specific area then to our greater region, that will require little care beyond their first year, while also providing valuable shelter and food to birds and pollinators. It is a happy coincidence that a closely-planted urban garden is both a benefit to the gardener as well as to wildlife. And so much the better, so that we may be like Thoreau, in our small retreat not far removed from the bustle of our own Concord, and watch the jays spar with the squirrels.

The canopy need not be high to make a forest. Woodland in Exmoor, Somerset, England

This natural landscape could be copied whole into a backyard; it needs no improvement. Bluff Point State Park, CT 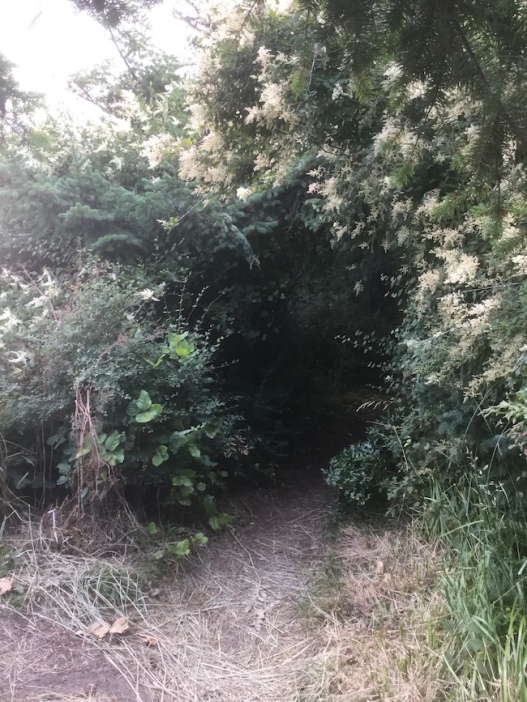 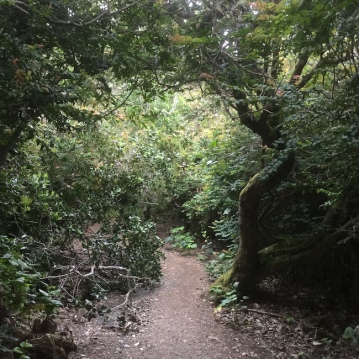 A low canopy in a coastal forest of northern California. 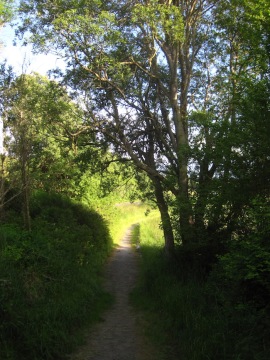 Multi-trunked small trees with strongly architectural features are beautiful in the wild and desirable in a small garden. Dungeness National Wildlife Refuge, WA

These trees are no taller than fifteen feet, yet create a welcoming avenue, shady in the summertime. Mary E Theler Wetlands, WA